Forever and Ever, Amen
A Memoir of Music, Faith, and Braving the Storms of Life

I am reviewing a copy of Forever and Ever, Amen through Thomas Nelson and Netgalley:

Randy Travis is beloved around the world, he has sold over twenty five million albums in both country and gospel genres. He is considered one of the finest performers of his generation with a fan base ranging from Mick Jagger to Gsrth Brooks!

Randy Travis went from a working class background in North Carolina to a job as a cook and club singer in Nashville, to overnight success with Storms of Life which launched the Neo Traditional movement in Country music. The first three decades are a true rags to riches story.

In 2009 Randy Travis’s seemingly charmed life began a downward spiral. His marriage ended, he learned his finances were a mess and his anger management issues led to alcohol abuse, public embarrassment and an arrest in 2012.

Just as he began piecing his life back together Randy suffered a massive stroke which they didn’t believe he would survive. But he did survive and he learned to walk again and in 2016 he accepted his induction into the Country Music Hall Of Fame by singing Amazing Grace.

I found Forever and Ever, Amen to be a heartfelt ad uplifting autobiography one that reminds us that even as we go through the valleys we can find strength.

Forever and Ever, Amen is worthy of five out of five stars!

The God Dare
Will You Choose to Believe the Impossible?

I am reviewing a copy of The God Dare through Barbour Publishing Inc/Shiloh Run Press and Netgalley:

We are on this planet for a reason it is something we know deep down inside. God has a plan, a plan that is made just for you. He choose you for this plan for the very foundation of the Earth. He designed us for this time and place and he is equipped Thou to succeed in those plans.

All God needs is a willing vessel are you willing to be that?

I give The God Dare five out of five stars!

Dear Daughters
Love Letters to the Next Generation

I am reviewing a copy of Dear Daughters through Abingdon Press and Netgalley:

In Dear Daughters Susie Davis helps to bridge the gap between Daughters and their spiritual Mamma’s. Dear Daughters are the young women if search of spiritual guidance, and Dear Mamma’s are the ones just a little down the road from them in life with valuable insight and wisdom to share.

If you are looking for a gift idea for the Spiritual Daughters or Spiritual Mamma’s in your life then Dear Daughters is just the book for you.

I found Dear Daughters to be insightful and full of good advice for both Spiritual Daughters and Spiritual Mamma’s and therefore worthy of five out of five stars!

Inside the Asylum
by Mary SanGiovanni

I am reviewing a copy of Inside the Asylum through Kensington Books/Lyrical Underground and Netgalley:

Kathy has been hired to assess the threat of Henry Banks an inmate at the Connecticut-Newlyn hospital for the criminally insane, it is the same hospital that her brother is housed in. The people who employ her believe that Henry has the ability to open doors to other dimensions with his mind—making him one of the most dangerous men in modern history. Because her clients are affiliated with certain government organizations that investigate people like Henry- and the potential to weaponize such abilities.

Through interviewing Henry, and in unfavorable run-in’s with her brother she comes to realize that Henry can create Tulsa’s world’s and lives so vivid that they come to life. But these creations now want lives outside of Henry and they will not stop until they have created their emancipation.

I found Inside the Asylum to be worthy of three out of five stars!

I am reviewing a copy of Belinda Blake and the Snake in the Grass through Kensington Books/Lyrical Underground and Netgalley:

Belinda Blake is a pet sitter whose not easily rattled, but move in day has been eventful. The python in hot care managed to slither away in search of freedom just as she meets her landlords disarmingly handsome son Stone Carrington V. One the snake is back in its cage, she heads out to the garden where she discovers a designer shoe poking out of the boxwood hedge, the designer shoe is attached to a dead woman’s body.

Margo Fenton was the victim and had been a Carrington family friend and everyone in their circle is under suspicion. Between client trips to Manhattan and visits her family in upstate New York, Belinda starts to put the pieces together. Though she I’d falling for Stone’s numerous charms but Belinda can’t help but wonder if she’s cozying up to s killer! Soon daily contact with a deadly reptile may end up being the least of her concerns!

I found Belinda Blake and the Snake in the Grass to be a fun read and worthy of five out of five stars!

I am reviewing a copy of The Silence Between Us through Blink and Netgalley:

For five years Maya has attended a school for the Deaf, but now during her Senior year they haves moved and she must attend a hearing school because the deaf High School is over an hour away. Leaving behind Pratt School for the Deaf where she has been a student for years only to go and attend a hearing school which is worse. Maya has dreams of breaking into the medical field and is determined to get the grades and a college degree to match, she’s never thought of being Deaf a disability. But her teachers and classmates at Engelmann High don’t seem to share her optimism.

There’s Beau Watson Englemann’s Student body president, when he learns ASL, Maya can’t help wonder if he has a hidden agenda or if he truly wants to communicate with her. She does find it nice to be able to sign with someone when she has to lip read all the time, but Maya has always been told Deaf/Hearing relationships do not work!

There are clear differences in Beau and Maya’s world, and when Maya passes up on a chance to get a Cochlear Implant, Beau has trouble understanding why. It hurts Maya that Beau does not understand, she’s proud to be deaf, and doesn’t understand why Beau wants to change her.

I give The Silence Between Us five out of five stars! 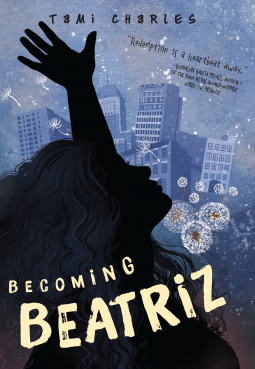 I am reviewing a copy of Becoming Beatriz through Charlesbridge Teen and Netgalley:

Up until Beatriz fifteenth birthday her dream was to get away from the Gang Life and become a professional dancer. Everything changed the day of her quinceañera. She is determined to get herself far from the Gang Life, the gang life that killed her brother Juan.

With her brother dead now Beatriz set of priorities how is she supposed to feel the rhythm of the dance when her brothers gang needs running and her Mom is locked in grief. The last thing she can remember of her old life is dancing with her brother!

Will Beatriz watch her dreams come true, or will they fade away? Find out in Becoming Beatriz!